The Florida Bar filed a Petition for Emergency Suspension recently in a case styled The Florida Bar v. Ashley Ann Krapacs. The Petition provides an illustration of some of the perils of social media. In it, there are thoughts about freedom of expression, as well as the Rules Regulating The Florida Bar. It is an interesting read. As an aside, I recently read a string on LinkedIn in which some seasoned attorneys were cautioning new attorneys about correspondence and email. Their theme was essentially to forgo quick responses, to allow moods to cool, and to respond without emotion. I agreed with their advice, and now think it may be good advice for the use of social media as well.

“has caused, or is likely to cause, immediate and great harm to clients and/or the public and that immediate action must be taken for the protection of the Respondent’s clients and the public.”

It therefore asks the Florida Supreme Court to immediately suspend Ms. Krapacs’ license to practice law in Florida. According to some information in the Petition, she is also concurrently licensed in other jurisdictions.
Ms. Krapacs was “admitted (to The Florida Bar) on April 25, 2016.” The Bar explains “Ms. Krapacs was in a personal relationship with Gregory Knoop, a non-lawyer and resident of Texas.” After moving to Florida, Ms. Krapacs “initiated a Petition for Domestic Violence Injunction against Knoop.” She “alleged that Knoop had previously abused her and was in fear of future abuse.”
Mr. Knoop hired attorney Russell J. Williams. There were proceedings before Judge Kaplan. Following those proceedings, The Bar alleges that Ms. Krapacs made statements on social media regarding the attorney, the judge, and the judicial process. Thereafter, Mr. Williams hired an attorney of his own, Nisha Bacchus, about whom further social media statements were allegedly made. The Bar accuses Ms. Krapacs (“respondent”) of thus having:

“targeted these two members of The Florida Bar with a variety of vicious social media online continuous attacks and other conduct as a result of their representation of clients in litigation against this Respondent.”

The Bar alleges that Ms. Krapacs has also expressed an intent to “‘connect’ with Ms. Bacchus’ former clients,” in an effort “to destroy Ms. Bacchus.” It alleges she has expressed an intent to file a Bar complaint against Ms. Bacchus, and to represent “several of her former clients in various bar complaints and potential malpractice cases.” There are specific examples provided in the Petition.
In response, Mr. Williams and Ms. Bacchus sought relief from the court system, according to the Petition. Ms. Bacchus obtained a “Temporary Injunction for Protection Against Stalking.” And she filed a police report. More recently, “Ms. Bacchus’ Request for a Permanent Injunction was granted.” Mr. Williams filed a lawsuit “for Libel, Slander, Malicious Prosecution and Injunctive Relief.” For clarity, The Bar notes it “is not concerned with the outcome of these (legal) proceedings,” but cites their existence in explanation and support of the Petition.
The Bar contends that Ms. Krapacs’ actions on social media “strike at the heart of conduct prejudicial to the administration of justice.” It alleges that her “attacks are solely because attorneys Williams and Bacchus represent or represented individuals adverse to the Respondent (her).” The Bar asserts that this social media effort has included “Facebook, Instagram, Linkedln, and . . . YouTube.”
The Bar characterizes Ms. Krapacs’ social media efforts as:

The Bar further alleges that as regards incivility, The Bar “deems this Respondent’s conduct to have exceeded any yet known boundaries.”
The Petition says that Ms. Krapacs contends (a “misguided belief”) “that the First Amendment (freedom of expression) shields her from scrutiny and prosecution by The Florida Bar for egregious misconduct.” It asserts, however, that “the First Amendment does not protect those who make harassing or threatening remarks about the judiciary or opposing counsel.” Furthermore, that “lawyers are required to refrain from knowingly disparaging or humiliating other lawyers.” (citations omitted).
The Bar contends that such “outrageous conduct only serves to perpetuate the public’s perception that lawyers are uncivilized.”
Among the statements allegedly included in the social media postings were:

There were allegedly also accusations made on social media that the judge was “biased and sexist.” Ms. Krapacs allegedly also referred specifically to attorney Williams as a “bully,” “a moron,” and “a sexist.”
In addition, there were words allegedly used on the social media platforms which some would perceive as insulting or vulgar, and which I will not repeat (another aside, I have made it a practice to block social media followers who use vulgarities, I simply do not care to read them).

In one, Ms. Krapacs allegedly suggested to Mr. Williams “just don’t be a (anatomy reference deleted).” In another, she allegedly referred to a legal proceeding as a “completely frivolous (male bovine manure reference deleted) lawsuit.” And in reference to Mr. Williams having hired Ms. Bacchus, Ms. Krapacs allegedly asserted “he is playing her like a (crass reference) fiddle.” There are other uses of expletives alleged. In one alleged statement, an expletive colloquially known as the “f-word” was repeated over ten times.

The Bar’s Petition came to my attention when a story by Raychel Lean in the Daily Business Review caught my attention, believe it or not, on social media. Though there are perils of social media, it nonetheless does effectively distribute information as you are proving by reading this blog. 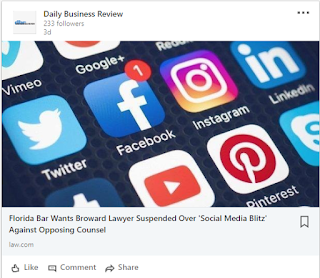 Ms. Lean’s story includes analysis from legal experts. One noted that “this case is the latest example of a culture clash between the legal world and the cyber realm.” While that is poignant, I would suggest that the clash is more specifically between the legal world and the modern “convenience” or “accessibility” of the cyber realm. Notably, the interviewed experts seem to be in agreement that lawyers and judges do forgo some measure of the right to free expression when assuming their respective roles.
One stressed that “it’s easy for an attorney to have hard feelings.” That is true. Find me a lawyer that has never had hard feelings, and I will be most impressed. I have certainly had them, and witnessed them in others. A great many hours have been spent over my years in this profession listening to attorneys vent their feelings. Many of those times because she/he was certain some judge somewhere just did not get it. But, venting to a sympathetic ear is not the same as venting to the entire world. My advice to attorneys is to find some mentor or peer to whom you can vent frustration and hard feelings. There is a cathartic effect of getting things off your chest.
However, as exasperated as those lawyers have been, I have only experienced one expressing those thoughts and perceptions as publicly as is alleged in this Petition. That instance did not involve social media, but mass-mailings. Those mailings came at all hours of the day and night, venting, accusing, and some felt even threatening. So, such feelings are not new; communicating about feelings is not new. Instead, I suggest that social media has merely made it simpler to communicate about them, “louder” and to a broader audience?
While some will decry the legal profession and perhaps express perceptions of its decline, maybe the profession is sound in large part but the modern conveniences more easily facilitate or illustrate our human shortcomings? I suggest that we will all be periodically frustrated and that the best advice out there is to strive to wait, to calm, to contemplate, before we respond. Whether its a letter, a post, or a tweet, perhaps time can be the buffer we need in order to marshal our thoughts, restrain our disappointment or other genuine emotions, and regain our professional composure before we proceed?

At the end of the day, attorneys must remember that their goal is to effectively represent the interests of their client. In that profession, there will be victories and defeats. There will be disappointments, frustration, disbelief and anger. Bottling that up inside is not healthy for us personally; we need to confide it, to vent it. When we do, I think that our mentors and peers will be more receptive if we avoid epithets, insults, and vulgarity. And, it may not be appropriate to do so through social media, the Court will perhaps provide some explanation and guidance on that when it rules. Certainly, the resolution of this intriguing Petition will be interesting to observe.